skip to main | skip to sidebar

Midterm Project 3
Posted by Christine Petrick at 4:53 PM No comments:

The goal of this project is to open the minds and eyes of people to the relevance and dispartiy of realism that workers go through. This will be seen through the process of making this documentary and of course, in the finished piece as well. Strike on Congress will explain and demonstrate the process that many men and women face when their benefits are taken away from them; benefits that people in certain jobs have available to them no matter what. For those benefits to be taken away, how are people supposed to live? How are they suposed to support themselves? Will they ever be able to retire or will they have to work for the rest of their lives? What happens when they hurt themselves and they don't have health insurance and have to pay for health care themselves?

The economy seems to be getting worse and worse and it is getting harder and harder for people to find jobs just to survive. Our goal in making this documentary is to help these people get their benefits back so that they can live a happy life and not have to worry about what is going to happen tomorrow or the next day.
Posted by Christine Petrick at 12:34 PM No comments:

Synopsis
Strike on Congress is a look at the men and women on the picket line in front of the Congress Plaza Hotel. Looking at an in depth and visual aspect of the truth behind the signs and the picket line. The documentary shows the grueling process of what these people have to go through every single day; the customers of the hotel walking right past them, the bell hops completely ignoring them and even the people who walk past the hotel every day and don't stop to see what's going on.

Summary
Strike on Congress will feature footage of the strike in progress, interviews with the strikers, people on the streets, the coordinator of the strike, and also the emotional journey that these people have gone through and continue to go through day after day.

This story isn't just going to be told through the eyes of the strikers, but through a student's account of walking past them every single day and finding out that nothing is getting better for them. A reoccurring theme of fighting for what these people believe in is amazing. They convey the patience that they have built up because they will not stop at anything.

Strike on Congress also addresses the concept of peace within a human. The amount of determination that these people have is so courageous and the people of Chicago shoudl see that and help them get what they want back. Strike on Congress will hopefully be an impetus for man and women to put forth the effort to do what is right for everyone working to survive out there in the real world where jobs are scarce and the ones that do exist take away the workers' benefits.
Posted by Christine Petrick at 12:22 PM 1 comment: 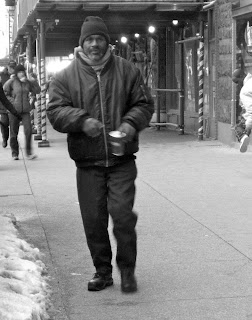 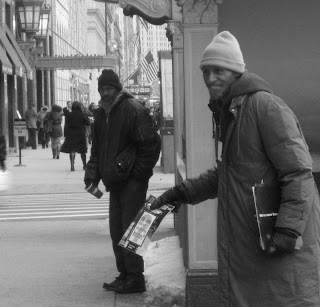 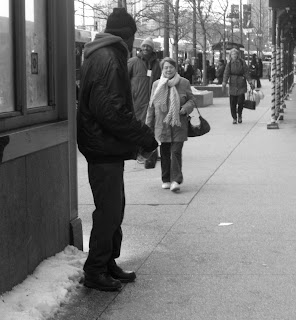 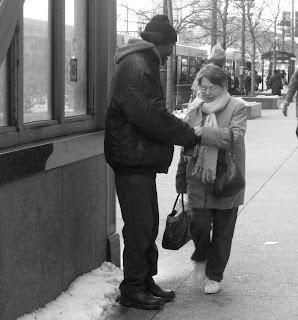 Culture, Race, and Media made a big impact on me last semester here at Columbia College. I was blown away when I was forced to think about things that I have never thought about before. I accepted certain social injustices because that is just what I thought I was supposed to do, but I learned that they were issues that I need to learn about. I needed to open my mind up to certain situations. I was a little bit uncomfortable in the class in the beginning, but I soon learned that my words really meant something and I needed to open my mouth and let me classmates know how I really felt about the subjects we were being taught. When I found out about this Documenting Social Injustice class, I knew that I had to broaden my horizons even more to really get a taste of what is really happening out there in the real world.

Knowing that I could potentially help people by taking this class really motivated me. I have always thought of helping people in need, but I've never actually done anything to help. I knew that this was my chance to really put myself out there and open my eyes to things that I hadn't before. I was tired of sitting around and letting life pass me by. I knew that I had to become active and really do something important to help people around me instead of just worrying about myself all the time. Even though I will be faced with situations where I may not know what to do, I will definitely do my best to work hard and achieve something that I've never done before. That is my goal in this class. I hope that I will become a better and more well-rounded person after exposing myself to this new way of thinking and analyzing certain issues.
Posted by Christine Petrick at 10:01 PM No comments:

My Moment of Change

One very big moment in my life that changed everything was the moment when I moved into my new apartment at Columbia College Chicago. The city was huge to be when I first arrived with all of my stuff. The buildings were so tall and intimidating. Even though it seemed as if the people on the streets were running past me and blurs of people appeared and suddenly disappeared, I wasn't going to let that scare me. I had always dreamed of what it would be like to go school here and now that it was finally happening, I knew that things were going to change. And not only did my lifestyle change, but I changed as well. I learned so many new things living in downtown Chicago and attending Columbia College. I met so many new and exciting people that have most definitely contributed to the opinions I have about various subjects. I never knew what an impact that made, but now that I have experienced it first hand; I understand.

So, living with three other girls in an apartment was the most life-changing for me. My parents got divorced when I was five years old, so I have been living with just my mom for about fifteen years now. I've never had any siblings so it's been a rough semester adjusting to the other girls. I got homesick often, so I would go home on the weekends a lot to visit my mom. When I got back though, I tried not to let the little things bother me, but they did. So it basically took me about three months to get used to having these other girls around. I'm sure it was hard for them to live with someone new as well so I wasn't the only one, but it felt like I was all alone. At first, I thought that we would all kind of keep to ourselves, but that changed quickly and I've learned a lot about these girls and they have taught me a lot about myself that I never knew before.

Not only did I share an apartment with three girls, but I shared a bedroom with one of them. This was tough for both os us, but eventually we got used to it. We worked around each other's schedules and really got to know one another in the process. now I can't even imagine what my first semester would have been like without Lizie, that's her name by the way. She has taught me to become a stronger and more independent person and also how to do things for myself instead of relying on others all the time. My life was turned upside down when I came to Columbia College Chicago, but I wouldn't have wanted it any other way.